Posted in Ramblings | Comments Off on glTF is Cool!

What is glTF you ask? It’s a file format for 3D models — and it is cool! It was created by the Khronos Group, who are the same folks responsible for OpenGL, and it is glorious. First, it contains all the data you need: scenes, lights, cameras, geometry, materials, animations, & morph targets. Second, it’s open, well-documented, and straight-forward. Third, it has both binary & text formats, and the text-format is JSON. Fourth, did I mention the text format is JSON? Oh, how I love JSON!

I suppose you may have to implement other 3D format readers to truly appreciate it (DXF anyone?), but it is slick. For any programmer implementing a 3D model reader who is trying to decide between OBJ, DXF, Collada, et al., the answer is glTF! Trust me on this one. 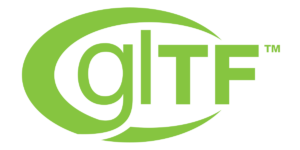 Posted in Ramblings | Comments Off on My Twitter Obsession

My Twitter account was made back in 2014. Like this site, it also sat pretty much idle for 3 years. I only picked it up a few months ago, so it is fair to say I’m a Twitter noob. I started following a couple artists who had tweeted with #3dmodeling, but it didn’t take long for me to notice that some of these people had tens-of-thousands of followers!

At the time I had 9 followers (8 of which were from 2014 and inactive). Having a numerical value assigned to your insignificance is pretty humbling. “What would I have to do to get that many followers?”, I wondered. And, I’m still wondering! Without being a celebrity, attracting that size of an audience just from posting images of your work is very impressive.

I have 45 followers at the time of this post. They are unreasonably important to me. 🙂 I had 49 a few days ago, and I’m still in mourning over the loss. After each tweet I anxiously wait to see if I pick up any new followers. If even one new person follows me, I celebrate.

This is probably not normal, and I may have a problem. But, surely the obsessing over followers wears off? After 100 followers? Or 1,000? I may need an intervention, or maybe I just need to figure out how to make better tweets!

Posted in Ramblings | Comments Off on Distracted by Unreal Engine 4

Over two weeks ago, Epic announced that UE4 was available for $19/month. This completely derailed things here for me. I was in the middle of working on a minimalist 2D side-scroller using the Unity engine, but could not resist taking time-out to evaluate the industry’s premier game engine — and I’m still completely distracted with it.

UE4 is not Unity. It has a much steeper learning curve and for the novice UE4 developer things rarely “just work”. UE4 has a component-based workflow similar to Unity with a gorgeous user interface, but the systems are complex and understanding how everything fits together is non-obvious. Even after experimenting with UE4 since it’s first day of availability, it can still take several hours to build a simple controllable, animated character from scratch compared with the 15-30 minutes it would take in Unity. I suspect many, at this point, have returned to Unity where simply writing a script and attaching it to a game object can make that object do nearly anything and in almost no time.

Yet, after many nights of frustration, I cannot seem to put UE4 down. It’s powerful, it’s beautiful, it’s prestigious and most importantly it’s available in it’s entirety for only $19/mo — which, by contrast, makes Unity look expensive, if not downright unaffordable for a small Indie developer hoping to ship on more than a single platform.

Would I like to make a game with UE4? Definitely. Would that game be a 2D side-scrolling brawler? Probably not. Will UE4 become a permanent distraction? I will just have to wait and see.

Posted in Ramblings | Comments Off on What is an Inkthorne?

While I’m not entirely sure I answer that question, visit the updated About page to find out more about who I am and what I am working on!

Congrats to Monkey Guy Games on their release of Fail Frog!  It’s a challenging flappy-like game with an awesome cross-eyed frog and platforms at varying heights you jump on.  I suppose MGG may take issue with my “cross-eyed” description, but I call ’em like I see ’em.  Check out the game on the Google Play store and see for yourself.

Posted in Ramblings | Comments Off on I’m a Game Dev, not a Web Dev!

I have a confession.  I have absolutely no clue what I’m doing.  Yet, I’m having a blast trying to figure it all out.  I typically spend my time thinking about how many milliseconds a frame takes or whether the character’s animation states blend properly.  I’m not accustomed to all this new-fangled web technology!